Impact of Project Mosquito Nets in 2018 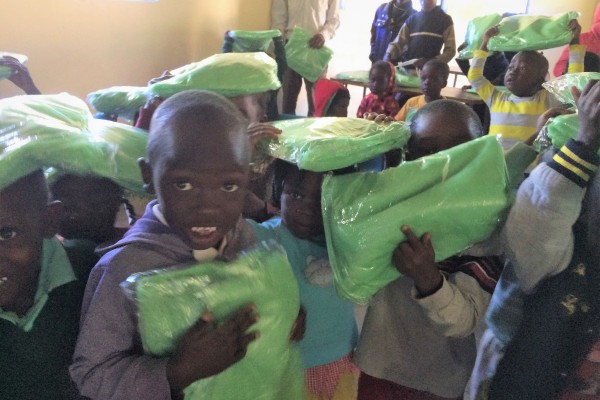 Thank you for Helping Create a Malaria Free World

Impact of ending malaria: Ending malaria will generate profound health and economic benefits globally. Malaria free countries have five times greater economic growth than countries with malaria. Each dollar invested in malaria control in Africa, returns $40 in economic growth, contributing to Africa’s prosperity and its prospects as a trading partner. Better health and incomes for all will put the world on the path to sustainable development as outlined by the UN’s sustainable development goals for 2030.

Location and Need: Beneficiary communities, four urban and three rural, were carefully selected based on need and the prevalence of malaria.

Plan for 2019 is to provide 10,000-15,000 long lasting insecticide treated nets and education to families vulnerable to malaria.

Malaria can kill: Globally malaria is still a problem even though it is both preventable and treatable. There were an estimated 216 million cases of malaria and 445,000 deaths in 2016 worldwide.  Sub-Saharan Africa continues to carry a disproportionately high share of the global malaria burden - this region was home to 90% of malaria cases and deaths in 2016. In addition, children under five are particularly susceptible to malaria infection and death. In 2016, malaria killed an estimated 290,000 children under-five globally; most of these deaths were in the African region. Moreover, pregnant women, people infected with TB, older people, and people living with HIV are especially vulnerable to malaria as co-infections rates between malaria, HIV, and TB are very high.

Economic Impact: Ending malaria will generate profound health and economic benefits globally. Malaria free countries have five times greater economic growth than countries with malaria. Each dollar invested in malaria control in Africa, returns $40 in economic growth, contributing to Africa’s prosperity and its prospects as a trading partner. Better health and incomes for all will put the world on the path to sustainable development as outlined by the UN’s sustainable development goals for 2030.

Is it possible to reduce malaria deaths to zero? The answer is “yes, as malaria is both preventable and curable. Malaria has been eradicated in several countries such as the US, and it is possible to eradicate it worldwide. Over the last 15 years, increased prevention and control measures have led to a 60% reduction in malaria mortality rates globally. According to the World Health Organization, this has been due to the use insecticide treated nets, indoor residual spraying, and malaria treatment drugs. In addition, research on a malaria vaccine has been progressing and we may have a malaria vaccine soon.

Need for Nets: In 2016, about 50% of people at risk of malaria in sub-Saharan Africa slept under an ITN (insecticide treated net) compared to 30% in 2010 and a mere 2% in 2000. But, the rate of increase in ITN coverage has slowed since 2014. According to the World Health Organization, 90 percent of families with a bed net use it. However, only 43% of households had enough nets for all household members which is drastically short of the universal access of 100% to achieve the goal of ending malaria by 2030. Moreover, a decline in the coverage of insecticide treated nets can lead to a major resurgence of the disease and can reverse the gains achieved over the last several years. This underscores the need to increase access of nets while we have momentum to eliminate malaria.

In Zambia, malaria transmission rates are high in all areas of the country. However, one-third of households do not have access to even one net. Two-thirds of household have one net but may need more than one net for their household.

Can Malaria be eliminated from Zambia: Zambia has set a lofty goal of eliminating malaria by 2021. According to the USAID, this goal is ambitious, but within reach. The country faces significant challenges such as poor infrastructure, weak health systems, porous borders, lack of funds, and mosquito resistance to insecticides. However, many of these challenges can be overcome with the provision of education and insecticide treated nets.

Challenges: Some challenges to reachign a malaria free world are (i) lack of sustainable and predictable international and domestic funding, (ii) risks posed by conflict in malaria endemic zones, (iii) anomalous climate patterns, and (iv) mosquito resistance to insecticides. Malaria endemic countries are working to overcome these challenges.

Our vision: Our vision is that malaria deaths are reduced to zero in the next three years in Zambia. Our goal is to reduce the incidence of malaria in beneficiary communities. To achieve this goal, our plan is to provide 10,000-15,000 long lasting insecticide treated nets to families vulnerable to malaria next year.

Program Activities: Provision of nets and education on malaria activities were held in seven communities in 2018. Participants at the malaria prevention events included local leaders, health care professionals, and church members community organizations, health clinics, and community residents. The events are typically kicked off by a prayer and traditional songs.

Education: Health care professionals provided education on malaria and a demonstration on the proper use of nets. Topics discussed during this session included: hygiene, drainage maintenance, filling and removal of mosquito breeding sites, proper use and maintenance of nets (cleaning and storage) to prevent damage, negative impact of malaria in pregnancy, information about malaria for HIV+ children, identification of signs and symptoms of malaria, and information regarding regular re-treatment of nets, cost, and location. This was followed by a demonstration and a question answer session regarding malaria and its symptoms for timely treatment. As per WHO guidelines, health care professionals explained that the best way to prevent malaria was to sleep under a net every night during malaria season. Information regarding location, timing, and cost of re-treatment was provided. In addition, the importance of keeping nets clean and stored properly was emphasized. Finally, families were informed about the importance of preventing malaria while pregnant, as it could be fatal for HIV+ pregnant women.

Provision of Nets: After the education and demonstration, 8,500 long lasting insecticide treated nets were provided in four urban and three rural communities in Zambia. The need for nets is huge especially in the rural areas such as Lwashimba and Kapiri due to the high level of poverty and lack of education regarding malaria. Kapiri-Mposhi saw an increase in malaria cases in 2018. In addition, these areas are visited by medical staff to administer vaccinations, anti-natal services, and weigh babies just twice a month. Our nets provision coincided with these bi-monthly visits to maximize access to vulnerable populations.

Profile of Beneficiaries: Identification of beneficiaries was done with the help of community organizations, churches, and government health clinics. Most beneficiaries are children living with HIV, children under the age of five, pregnant women, breast feeding moms, and adults who are infected with TB and/or HIV. These sections of the population are most vulnerable to malaria due high co-infection rates between malaria, HIV and TB. In addition, most beneficiaries cannot afford to purchase nets for their families.

This program is unique as it is a part of our comprehensive program that includes pediatric HIV care and women’s empowerment programs. Second, education is provided along with nets so that a family is equipped to take care of its health. Third, we get honest feedback on impact from community members as we are embedded in the community.

Lives can be saved for just a few pennies: A net can sleep up to four young children or two adults and can last for 2-3 years. A $5 net can keep 3-4 children malaria free, healthy and in school. Since malaria can be fatal for an HIV+ pregnant woman or an HIV+ young child, it costs just a few pennies to save lives and/or to keep families malaria free.

Provision of bed nets and education has gone a long way in reducing the incidence of malaria in our communities. As a result, beneficiary families:

How Effective are Nets?

To assess the impact of this program, we got responses from over 1200 beneficiaries via interviews and focus groups discussions in December 2017, February 2018, and October 2018. Here are some heartwarming numbers from the field:

These findings confirm WHO's results that sleeping under a good quality mosquito bed net is one of the cheapest and most effective methods of malaria prevention. This is especially true for populations vulnerable to malaria such as children and adults living with HIV, older people, HIV+ pregnant women, young children, and people infected with TB.

Challenges: In rural areas such as Lwashimba and Kapiri-Mposhi, a few beneficiaries complained that the nets were being eaten by rats, and that the rural health center did not have enough medicine to re-treat the nets.

​We are confident that we can end malaria by 2030 as envisioned by the UN sustainable development goals.