Need For Nets Continues to be Huge 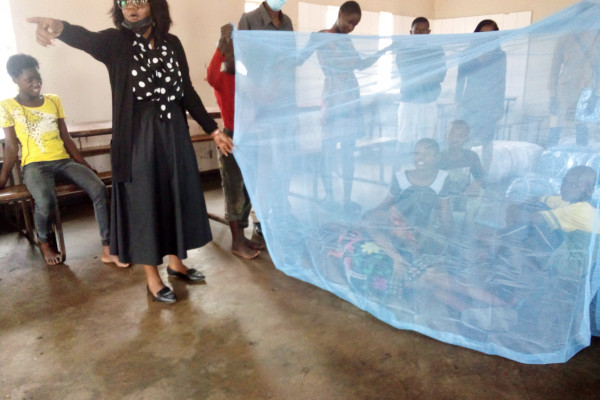 Malaria Prevention Plan: In Zambia, malaria season runs from October to May. In the first three months of 2022, 10,000 mosquito bed nets and education were provided in four rural and five urban areas. Currently, we are raising funds to provide an additional 12,000 nets in September before the next malaria season. This will bring the total to 22,000 nets this year, that will keep more than 70,000 children or 40,000 adults safe from malaria as each net can sleep up to four young children or two adults. Sleeping under a net regularly during malaria season prevents malaria and strengthens the developing immune systems of children.

Need for Nets: Zambia remains a highly endemic malaria country, with the entire population of about 19 million considered to be at risk of contracting malaria. It is among the 20 countries with the highest malaria incidence and mortality globally.  The country carries 2% of the global malaria case burden and 5.2% of the case burden in East and Southern Africa. Poor urban and rural areas especially those close to rivers, with poor sanitation, and located far from the government clinic are the most vulnerable.

Between 2016 and 2019, there was a 27% reduction in malaria cases. In the first half of 2020, however, the National Malaria Elimination Centre (NMEC) reported a 30–50% increase in malaria cases, malaria deaths, and test positivity rates nationally, as compared with 2018 and 2019. According to the WHO’s latest World Malaria report, the COVID-19 epidemic has disrupted malaria services leading to a marked increase in cases and deaths.

Zambia can be malaria free: Your continued support for malaria prevention program will go a long way in reducing the incidence of malaria and keeping vulnerable Zambians healthy. Our vision is for Zambia to be malaria free in the next 2-3 years. Help us make this a reality.